Normally when you initialize a new Google map you set the coordinates for the center of the map and manually specifies the initial zoom level. Sometimes, however, there’s a need to dynamically calculate the center point and zoom level for certain content to fit into the viewport.

Let’s say that you have a number of markers on a map and you want the map to be displayed so that they all fit inside the viewport. You could of course experiment with center point and zoom levels to get it right. But what if the markers are put there dynamically so you don’t know beforehand where they’ll show up?

That’s where this trick will come in handy. 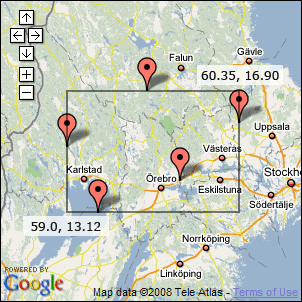 Now that you know the coordinates you just have to create a GLatLngBounds object, define it’s coordinates and serve it to GMap2.setCenter().

GMap2.getBoundsZoomLevel() calculates the appropriate zoom level to fit the bounding box in the available viewport. It also adds some extra padding around the box.

I was shown this technique by my good friend Fredrik Jonsson, who writes about programming on freddes.se.