My Firefox installation got upgraded to 3.0.2 today. And to my surprise the back and forward buttons is gone!

At first I thought that this was a either a major bug that slipped in the new release, or maybe some clever enhancement a´la the Awesome bar. But after checking with a coworker, who’s also got the new version but still has the buttons, I suspect that this might be something strange happening on my computer.

I don’t think Jakob Nielsen will take lightly on this as he says that according to his research, the back button is the second most used navigation feature. 🙂 The back button indeed act as sort of an undo function. Enabling the user to back out from unwanted pages.

I’ve tried to restart Firefox but that didn’t help. Maybe rebooting the computer can fix it?

Does anyone else experience the same problem?

Update: While looking in to this a little further I’ve managed to get my back button back again. By right-clicking the menubar and select “Customize” from the context menu, I found my missing buttons and could easily drag them back where they belong. 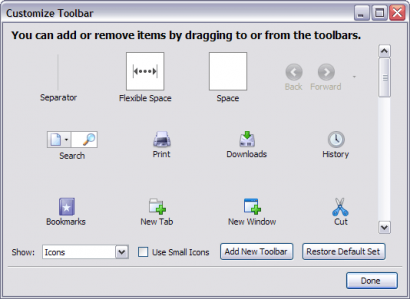 The question is what made them disappear in the first place.