As I mentioned in the article Extending Google Maps API 3 with libraries a couple of weeks ago, you can add functionality to the Google Maps API by using libraries. One of these libraries are the Geometry Library. In this article I will show how you can use the function of that library to calculate distances and areas. I will also explain some additional navigation functions that you might find useful.

First of all to be able to use the library you need to let the Google Maps API know that you want to use it. This is done by adding an extra parameter to the querystring when including the Maps API on the web page.

Once you’ve done that you have a number of extra functions that you can use. They all reside in one of two namespaces:

The spherical namespace includes functions for calculating angles, distances and areas from latitudes and longitudes. These are the functions that we will examine in this article.

The other namespace, encoding, contains functions for encoding and decoding paths for polylines and polygons. They’re useful when you have big sets of data for displaying polylines or polygons that you need to optimize. I will not describe this namespace further here, maybe it’s a subject for a future article.

Note: The library doesn’t consist of any classes but only have static functions.

The earth is round, the map is flat

When calculating distances and areas you need to take the fact that the earth is round into consideration (hence the name spherical). Since a map is flat a straight line on it is in fact an arc. Take a look at the map below. The shortest route between New York and London will look like an arc on a flat map (the blue line in the image below). 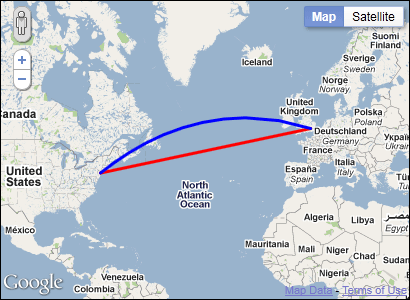 A straight line between two point on a map is in fact an arc.

Therefor when calculating distances and areas you need to use some pretty advanced mathematics to do it. Fortunately with the Geometry Library it’s dead simple.

Calculating the distance between two points is really easy with the help of the Geometry library. All you have to do is to call the computeDistanceBetween() function and pass it two LatLng objects.

The function returns the distance in meters. In this case it says that it’s 5 576 673 meters between NYC and London.

If you also want to know the heading between two points you can use the computeHeading() function. It also takes two LatLng objects and determines the heading from the first to the second.

To calculate the size of an area there’s the computeArea() function. Unlike the two previous functions it takes an array of LatLng objects as a parameter. The LatLng’s in this array represents a polygon and it must be closed, meaning that it will automatically close the polygon by connection the first and the last LatLng.

Note: You can also pass a MVCArray as a parameter. It’s basically a regular array but is API specific and has a few other advantages.

There are a few additional functions apart from the ones that calculates distances and areas.

If we take the values from the previous examples, the location of NYC, the distance to London and the heading towards London and use them as input.

In this case endPoint will be the location of London which is LatLng(51.506, -0.118). (it differs slightly because I’ve rounded the numbers) 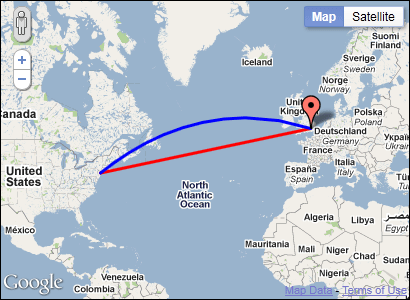 With the computeOffset() function we can get the end location if we know the starting point, the heading and the distance.

Calculate a point in between

This code will return a position right between NYC and London. 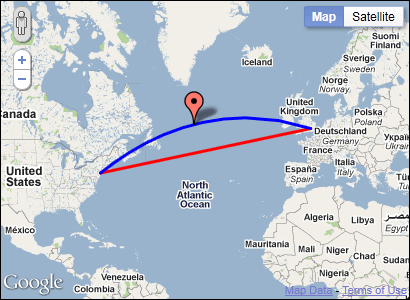 By using interpolate between NYC and London with the fraction 0.5 we get the position right in the middle of those.

Calculating areas and distances on geo data can be tricky, but with the help of the Geometry Library it’s really simple. I hope this article has shed some light on how you can use it in your own map solution.

To read more about this library, check out the article Google Maps Javascript API V3 Geometry Library in the offical documentation. You’ll also find a description of all the functions in the API documentation.