The API team however, wasn’t satisfied with just adding what was available in v2. They also added a drop animation similar to the one found in Google Maps on the iPhone. It looks like the marker is being dropped into place from above and then ends with a small bounce.

But they didn’t stop there either. They also added the ability to animate the markers at will. So now we can trigger the animation whenever we feel like it using the setAnimation() method of the Marker object.

Making the markers drop from above

When you create a new marker and want it to drop into place on the map, you can set the animation property of the MarkerOptions object to DROP. The marker will then fall from the sky when added. Also notice that I’ve set the draggable property to true to enables drag and drop functionality.

The setAnimation() method takes a constant from the Animation class and can be either BOUNCE or DROP.

To turn an animation on or off you simply call the method on the Marker object:

See it in action

I’ve created a demo that demonstrates these new features. It adds markers with a DROP animation and you can then make them dance by triggering the BOUNCE animation. The markers are draggable so you can try dragging them around to see how they behave. 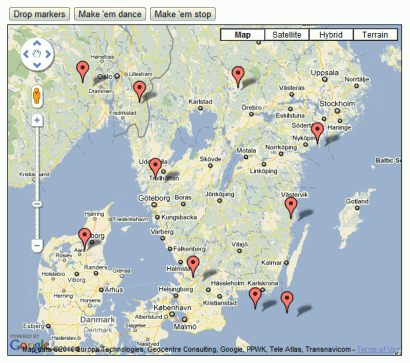 Be sure to check out the announcement in the article: The map markers! They move! on Google Geo Developers Blog and also check the documentation out.