The value of a holistic view 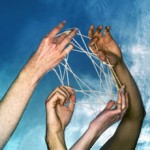 In development project teams there are often several specialized roles, like programmers, database designers, interaction designers, user researchers, business analysts and so on. Studies has shown that the more these different roles collaborate and are aware of the different aspects of the project as a whole as well as what the other project members are doing, the more successful the project is.

In Joseph Selbie article Bringing Holistic Awareness to Your Design at Boxes and Arrows, he discusses the value of a holistic view. In a best-practice study conducted at Selbie’s company Tristream the following was revealed:

Those teams that achieved the highest degree of shared, holistic understanding consistently designed the best web applications. The more each team member understood the business goals, the user needs, and the capabilities and limitations of the IT environment—a holistic view—the more successful the project. In contrast, the more each team member was “siloed” into knowing just their piece of the whole, the less successful the project.

The conclusion from this is that each member of a project team, should at some level, be involved in the user research process. There should also be lots of information sharing between team members, preferably through participation and by oral presentations and discussions of results.

The dangers of siloing in

The members of the teams that performed less well not only tended not to understand the application as a whole, they saw no need to understand it as a whole: programmers did not care to know about users, user researchers did not care to know about programming limitations, and stakeholders were uninvolved and were considered “clueless” by the rest of the development team.

This was a surprisingly common situation in many project teams, but one that clearly should be avoided.

Read more about this and what to do about it in the original article, Bringing Holistic Awareness to Your Design.