Is it just me or is Twitter exploding right now? Apart from noticing that I got more followers the last days, I’ve also noticed that several Twitter services such as Tweetburner and Mr. Tweet has been down for maintenance. That might be a sign of overload!

At a seminar I attended last week on Social Media one of the speakers Johan Ronnestam said that the reason Twitter is exploding right now is Barack Obama successful use of it during his election campaign. Every marketer worth his salt has now studied the phenomena and is busy trying to get everyone at their companies to use Twitter.

Today I also learned that Dalai Lama is now on Twitter. Watch his profile at @OHHDL. Pretty soon everyone will be on board, I’m just waiting to find my mothers Twitter profile! 🙂 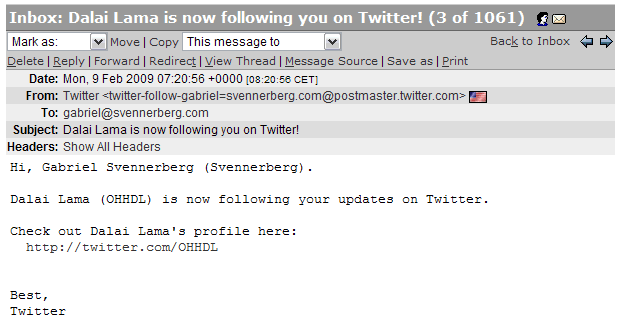 Dalai Lama was apparently a fake. That’s too bad because he was quickly becoming the most popular person on Twitter. Read all about it at the Next Web.