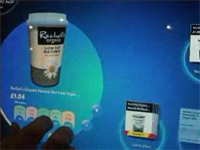 From what I can tell from the video it’s very much inspired by the iPhone interface. It’s probably the touchscreen and visual effects that gives that impression. The user interface looks really cool, but it do seem to lag and respond a little slow.

The UI has a lot of 3d effects. One pretty cool thing is that you can choose a product and then rotate it to read the text on the package. I’m not sure though, if that’s the optimal way to display that sort of information, but it sure looks cool.

Apparently it’s built with Microsoft’s WPF technology, the same technology that Silverlight is built upon. I haven’t seen much built with this technology so it’s nice to a example of what you can do with it.

In the video Paul Dawson and Matthew Adams demonstrates and explains how it’s all supposed to work. They also tell some about how they built it.

Read more about Conchango and the Tesco project on MSDN.

Thanks Peter, for showing me this.