Alerts seems to be the dominant solution to handle potentially “harmful” action but there are several problems with them.

Document modal alerts has gained popularity on the web but are little better than application modal dialogs. It’s the kind of alert that looks like lightbox showing an image (Click one of the images below to see what I mean). The only difference from application modal alerts is that they don’t lock up the whole browser but only the page you currently at. They do however share the same problems.

Here are some examples of web sites that have implemented different variations of an undo function.

Flickr has a nice way of showing important messages. The message is a link that takes you to the important information and in the right part of the message box there’s a close button.

When you click the close button the content of the message box changes into a short note that the message will disappear the next time the page loads. But there’s also an undo-link that gives the user the opportunity to change his mind.

This design pattern encourages the user to click things and explore the interface. The ignorant user is not punished for clicking the “x” not knowing what it will do. If it didn’t have the desired effect he can very easily recover from his mistake and still be able to read the important message. If it did what he thought it would he can just carry going about his business.

I think Gmail was the first web app that I seen using this design pattern. Their implementation gives the user the chance to undo the latest performed action.

In Google Docs there’s a similar solution. Whenever you perform an action such as moving or deleting a document. You have the opportunity to undo it until you perform another action. 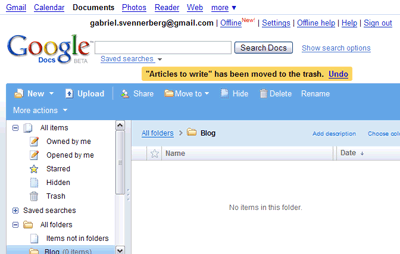 37Signals Writeboard facilitates a different kind of undo. When a Writeboard is deleted the following message appears enabling the user to, for a pretty long time, undo the deletion.

Mixx takes on a different approach with a time-limited undo. When you submit a new story, you have 15 minutes to edit or delete it. After that you can no longer do anything with it.

Although some web apps implements an undo function it’s still very simple ones, enabling the user to undo only the last action performed. The next logical step should be to implement a multi step undo, giving the user real confidence in exploring the application.

Aza Raskin has in his blogpost Undo made easy with Ajax (Part 1) and (Part 2) made an attempt to implement an undo function. He have, with the help of jQuery, made a simple one. It’s not without flaws but is still a good example of one way to implement it. He has also written an article on the subject, published on A list apart called Never Use a Warning When you Mean Undo.

Paul Boag over at Boagworld also have some interesting thoughts around undo.

What do you think about the undo function?