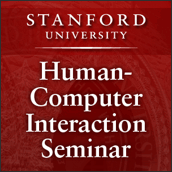 I haven’t watched all of the seminars but here’s three that I can really recommend.

Note: You will need iTunes to be able to access these resources. If you don’t have iTunes you can try the rss links in the list of seminar feeds.

The Design of Future Things: Cautious Cars and Cantankerous Kitchens

Don talks about things from his book with the same name as this seminar. He has a lot of interesting ideas about how we will interact with “future things”.

Bill is talking about the history of interaction design and give us lots of examples of the people behind those interaction techniques we now take for granted. He also show videos with people he interviewed for his book, Designing Interactions.

Why Phones Are Not Computers

Scott Jenson has worked with handheld devices a long time. He was designing the Apple Newton back in the day and now works at Google as manager of mobile UI. If you’re interested in designing for mobile devices, he has a lot of interesting knowledge to share.

Have you seen any of the seminars? Is there any others that you can recommend?